I’m not a talented travel writer like my blogging buddy Sue Slaght, but here’s what we’re doing this week: 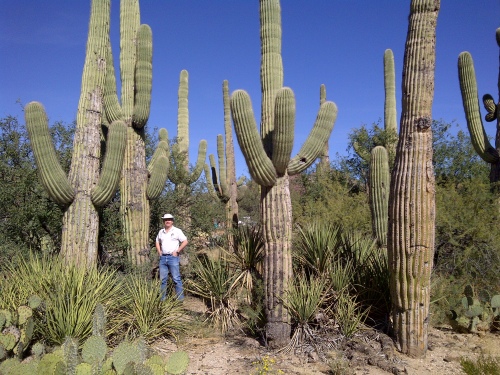 That’s Hubby mugging with our new neighbours, the saguaro cacti (also prickly pears in the foreground)

Yes, we’re on vacation this week, and it’s made me realize I don’t get out much.  It’s not that I don’t know what the outside world is like; it’s just that I kinda… forgot.

I had to laugh at myself when we got off the plane in Phoenix, Arizona.  I was harbouring a mental image and expectation of barren desert.  Which it is… outside the city.

And I was thinking Phoenix wasn’t actually much larger than Calgary… which it isn’t, until you add in the urban sprawl that includes about fourteen cities, all of them around the size of Phoenix.

So as a result of these comforting delusions I was semi-expecting an airport approximately the size of Calgary International, which, while not tiny, has lots of wide open spaces and is relatively easy to navigate.

When I got off the plane I nearly turned tail and ran back to beg them to take me somewhere less crowded.  Holy shit, there were a lot of people!

But I comforted myself with the knowledge that we’d be getting on the interstate freeway and heading out into the desert on our way to Tucson, so I’d soon be on the wide-open road.

I10 from Phoenix to Tucson is not ‘the wide-open road’.  Just sayin’.  That’s what rush-hour city traffic looks like where I come from.

And I’m not really an ‘interstate’ kind of person.  I like the back roads, where I can get close to the fields and untouched places and see the indigenous plants and birds and critters.  You don’t see much of that from the interstate.  I glimpsed some big areas of saguaro cactus, but they whisked by in a blur at 75 mph.  I spotted some cotton fields, but they were blurry with speed and distance, too.

Fortunately I’ve had a chance to go out and poke around in the desert for the last couple of days.  I’ve bought my obligatory field guide, and I’ve been having fun trying to identify all the native vegetation.  I recognize the prickly pear cactus from home (it does actually grow in some areas of Alberta), but around here it looks as though it’s on steroids.

We’ve been doing the tourist thing around Tucson, seeing the Pima Air and Space Museum and the Desert Museum and the Colossal Cave so far.  The Biosphere 2 is still on a tentative list, and I’m sure there are lots of other fascinating things to see and do around here.

And my life is complete because I’ve now met a saguaro up close and personal (but not too close – I’m not crazy about cactus spines).

What’s new and exciting in your world this week?