Hubby’s Got A Big Deck

I mentioned last year that Hubby had gotten a deck enlargement kit and we were very happy with the results, but this week he surprised me with an even bigger deck!

You’d think it would be too much of a good thing. In fact, before last week, if you had asked me if I was satisfied with the size of Hubby’s deck, I would have said “Definitely!”. But Hubby knows what I want even before I want it. One look at his new big deck, and I fell in love all over again. I wanted to be on it all day long!

And since we were hidden in the trees of our acreage, I blush to admit that’s exactly what I did. There’s nothing like enjoying a deck alfresco. The feel of the breeze on your skin; the illicit thrill of knowing somebody might sneak through the trees and catch you in the act… it was intoxicating!

And that night, sitting on Hubby’s deck was so good I saw stars.

The best part is its rigidity. Often a large deck can be floppy, but Hubby’s is as stiff as can be. He could probably have a dozen people on his deck in a day, and it would still be just as stiff as ever.

He’s not really into that, though – it’s just him and me.  Although… *whispers* …we might invite a couple of really close friends to join us later. But that’s probably too much information.

It’s not all sunshine and rainbows, though. One of the main problems with any deck is keeping it clean. There’s nothing more disgusting than a dirty deck, and after I’d gotten on and off Hubby’s deck so many times during the day, it really needed a good wash. So I got busy. Running my hands over his smooth hard wood was a joy, and his deck looked bigger than ever by the time I’d finished rubbing it all shiny clean.

So of course I couldn’t resist getting on it again. And again…

Another problem with a huge deck is that it tends to get in the way. In fact when I first saw it, Hubby was dragging it on the ground. It made me wince just watching him walk over the gravel.

But with a bit of manoeuvring he got it tucked into place, and now Hubby’s smiling again. He figures it was worth the temporary discomfort just to know that any guy would be envious of his big deck. And he doesn’t admit it to me, but I’m sure he knows a deck that size is a major chick magnet.

So we’re both delighted with his deck, and we’re looking forward to enjoying it together for a long time to come.

I hope the internet censors will look the other way just this once, because I can’t resist sharing a dirty picture of Hubby’s deck: 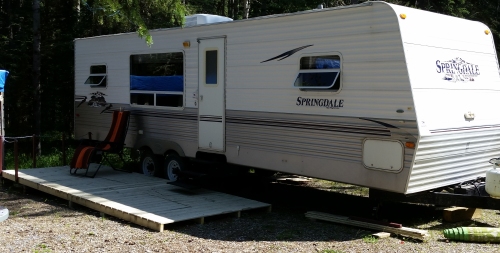 Sorry it’s dirty; I’d been on and off it all day and hadn’t gotten around to cleaning it yet…

Anybody else have a big deck story?

We have winners in the Book 8 Giveaway! Kathy Williamson and Lee-Ann have won the contest for signed paperback copies of Spy Now, Pay Later. Ladies, you should have received an email from me yesterday – if you didn’t, please click here to email me your mailing addresses. A big thanks to everybody for participating – I really enjoyed all your comments! 🙂

51 responses to “Hubby’s Got A Big Deck”