I made a scary discovery this past weekend.

Our garden is out in the wilderness so we’re always wary of bears, particularly in early spring when they’re hungry and grumpy and in late fall when they’re foraging for enough food to last them through hibernation. This has led to me regularly jettisoning my dignity as described here: https://blog.dianehenders.com/2013/08/28/scuse-my-bear-behind/.

But it’s mid-summer, so I’ve been starting to relax a bit. I figured by now the bears would have moved on to higher ground, and it would be too early for them to be coming down around our place searching for winter provisions.

How wrong I was. I had just finished strolling happily through the woods to my garden when one of our neighbours came by and stopped to chat. “Be careful,” says he. “Fish and Wildlife says there are seven grizzly bears in our area right now.”

Needless to say, my trip back through the woods was accompanied by a wildly swivelling head, a sweaty hand on my canister of bear spray, and embarrassingly high-pitched off-key singing.

That might have been pretty funny to a casual onlooker, but it’s old news to anybody who’s read my blog for a while. None of you expect me to exhibit any kind of dignity or decorum anyway, so when I started to plan this blog post I thought, “Let’s see, what can I say about grizzly bears that’s new and funny?”

Y’know what? I got nothing. Nothing is funny about grizzly bears. Grizzly bears scare the shit out of me. If I ever met one in the woods, and I sincerely hope I don’t, I’d probably kak my drawers on the spot.

Nature may abhor a vacuum (though I’ve never understood Mother Nature’s objection to cleaning tools), but my nature abhors any situation in which I can’t find some humour. So my renegade brain immediately leaped to the challenge of making grizzly bears funny. Maybe a grizzly bear in silly clothes?

Eh, maybe not. There’s something about all those claws and teeth that just takes the giggles right out of it.

But then I thought, “Maybe I’ve got it all wrong. After all, grizzly bears must have their problems like everybody else, right?” 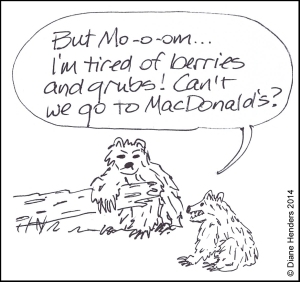 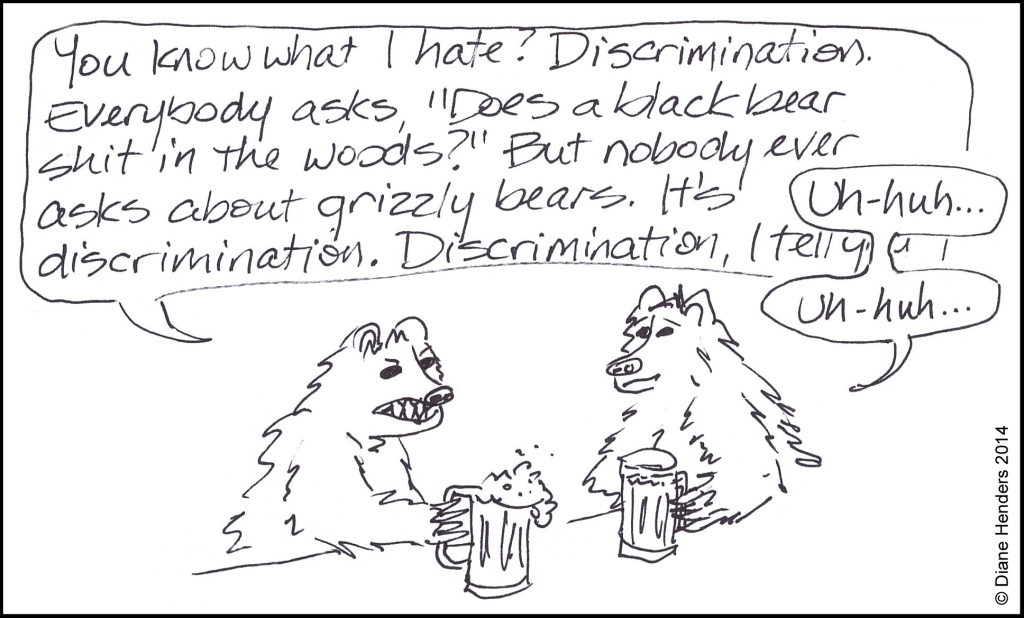 *After I drew this I realized it may be another Canadianism, so I decided to provide a bit of explanation for anyone who’s not from around here. ‘Does a black bear shit in the woods?’ is a rhetorical question that translates to ‘Hell, yes!’ Example:

So what do you think? Grizzlies: Tragic heroes of their own lives, trapped in fur suits and destined to be forever misunderstood? Or big-ass scary mo-fos with no sense of humour whatsoever?

I’m leaning toward the latter…

The deadline is almost here for draw winners to contact me.  Lee-Ann, if you’re out there, please email me before Friday or I’ll have to draw a different winner for the Spy Now, Pay Later signed paperback.  Thanks!

32 thoughts on “A Grizzly Attempt At Humour”