You know how you’re cheerfully going along and everything makes perfect sense, and then you find something that makes your brain screech to a halt and yelp, “Wait, what?”

This week I encountered more ‘what-were-they-thinking’ situations than usual.  For instance, I sometimes use preservative-free eye drops that come in teeny individual vials:

You’re supposed to open the vial, use what you need, and throw away the remainder to avoid contamination.  Each vial holds about seven drops.  But… most people have two eyes.  Why would they create a vial that holds an uneven number of drops?

At first glance it seems illogical, but I guess it’s actually marketing genius — they know you’ll have to waste part of each vial; and more waste for you equals more sales for them.  (Sometimes finding answers isn’t as satisfying as one might hope.)

Also:  This weekend I was at an art conference, where I learned about a new drawing tool.  It works like a wax crayon but also has water-soluble elements so you can drag a wet brush through it and get a watercolour effect.  Very cool indeed!  But why did they call it a ‘Woody’?

The Stabilo Woody: It even comes wearing a condom… erm, sorry; “protective sleeve”.

Not even the conference presenter was able to say ‘woody’ out loud without snickering.  I can’t believe that nobody on the Stabilo marketing team ever said, “Hey, you know that’s slang for an erect penis, right?”  (Or maybe they were snickering when they named it.  Hmmm.)  So wrap your hands around your woodies, folks, and let’s get this party started!

Also at the conference, I found this sign in the bathroom: 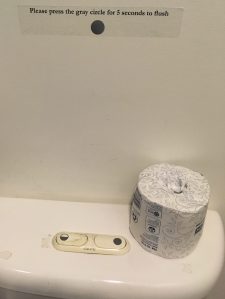 It says “Please press the grey circle for 5 seconds to flush”… and there’s a grey circle on the sign.

I wonder how many people did what I did:  Read the sign, saw the grey circle, and thought, “But pressing a dot on the wall won’t flush the toilet.”

The sign was actually referring to the grey circle on the dual-flush control for the toilet far below; and it was necessary because the other half of the control didn’t work.  But why would they put a grey circle on the sign and mount it so high it seems unrelated to the toilet?  It would have been much more helpful to place the sign directly above the actual control with a downward-pointing arrow.

I chuckled at this garbled communication, but maybe the joke’s on me.  Maybe I’m the only person who ever looked at the sign and momentarily wondered if I was supposed to press the wall.  But I don’t think so.  The grey circle on the sign looked suspiciously finger-smudged.

And now I’m giggling at the thought of people repeatedly pressing the dot and wondering why the toilet wouldn’t flush.

Any oddball events in your world this week?

Book 14 update:  I got into Chapter 27 this week.  It’s fun to be a fly on the wall when Reggie Chow and Holt The Magnificent lock horns!

P.S. For those who asked for an updated photo of the trellis project that singed my toes, here it is completed and installed: 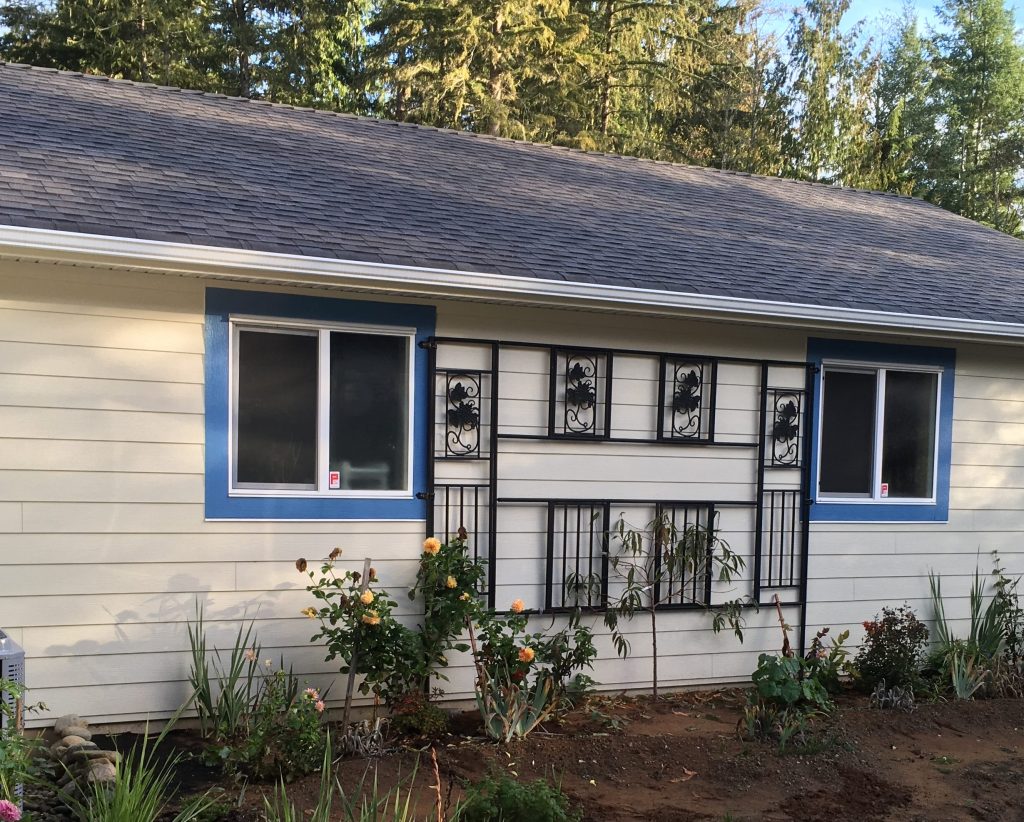 The last of the dahlias and glads are still hanging on, and yesterday I planted another 700 bulbs. We’re looking forward to the spring blooms!

26 thoughts on “What Were They Thinking?”