Alert the medical community:  Stress suppresses the juvenile-humour centres of the brain!

The proof:  Last week I completely missed the opportunity to make a dirty joke about herring spawning.  Millions of fish were coming their little brains out, and all I did was remark on the pretty jade-green water caused by all that fish-spunk.

Good Lord.  After 50-odd (okay, extremely odd) years of childishness, I’d hate to grow up at this late date.  But now that I’ve realized I’m on the slippery slope toward maturity, at least I can step off and reconnect with my inner adolescent.

So… speaking of sea-sex:  I have suspicions about those frisky seals.  All that frolicking and barking seems a lot like the human equivalent of “Here, hold my beer and watch this!”  They’re definitely angling to impress the chicks.

The sea lions, on the other hand, are only thinking about stuffing themselves.  Sex, schmex.  Mating season isn’t until June or July for them, so this is all about the foodfest.  On calm mornings the ocean is crowded with clusters of twenty or thirty sea lions bobbing along, bulging bellies to the sky and languid flippers in the air.

Which leads me to my next suspicion…

Actually, never mind that.  It’s not a suspicion; it’s a certainty:  Those sea lions aren’t just pigging out.  After they’d been around for a few days, the water wasn’t jade-green anymore.  It was brownish.  And, um… pungent-ish.

With the sea lions polluting the water and the herring roe decomposing in malodorous drifts along the shore, I rerouted my daily walk a little farther inland and enjoyed the ocean view with the windows closed.  The route revision wasn’t much of a hardship, though, since I’d already altered my walking habits due to the millions of seagulls.  The beaches were white with them as far as the eye could see:

No, that’s not snow on the beach; it’s wall-to-wall gulls

It wasn’t so bad when they were on the ground, but if something startled them (say, some foolish human walking along the beach) they’d rise in a solid wall and shit-strafe the beach. 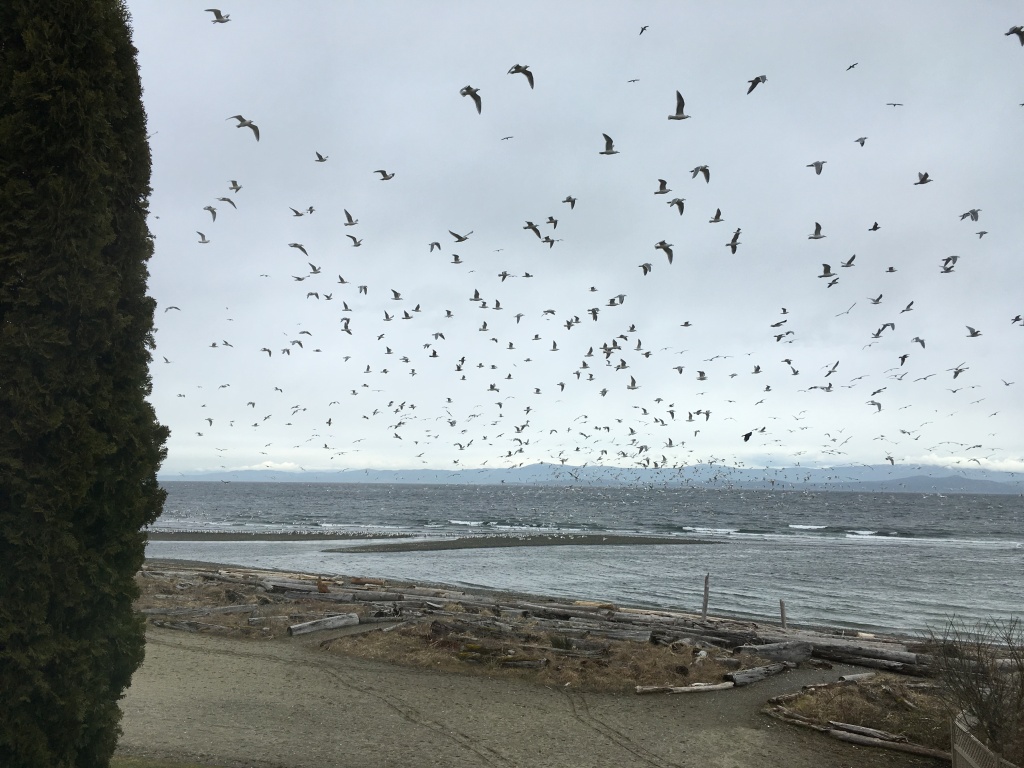 According to folklore, it’s good luck if a bird scores a bullseye on you; but it’s unclear whether it’s good luck for the shittee or the shitter.  I’m inclined to think it’s the latter.  Especially if the shitter is a seagull.  All I’m gonna say is:  Seagulls are sick, sick birds.

Apparently eagles don’t like seagulls any better than I do.  It’s easy to tell when an eagle shows up:  The shit-hawks take flight en masse.

I’m pretty sure the eagles are just messing with the gulls – they’ll swoop in and land on the freshly vacated beach, and then just sit there.  They’re not hunting or fishing; they’re just hanging around like schoolyard bullies hogging the playground while the seagulls circle anxiously overhead. (No word on whether the eagles get shit-strafed, but they’re probably too cool to admit it if they do.)

32 thoughts on “Seagulls And Other S-Words”