Woohoo! The new cover for Book 2: THE SPY IS CAST is finally ready!  Playing with the Audi R8 was fabulous, and it brought back memories, too.

I’d love to blame the long delay on ‘circumstances beyond my control’, but the truth is I’m doing the covers myself and it took so long because I’m short on ‘spare’ time and dog-slow at Photoshop. But hey, I’m getting better! By the time I’ve finished updating all the covers, I should be a pro. (Or, more likely, a trained chimpanzee repeating rote behaviours without grasping the underlying concepts, but whatever. It kinda looks the same to anybody who isn’t a pro themselves.)

Anyway, without further ado, here it is:

I’m pleased with the sophisticated gray-on-gray (no, not Fifty Shades) look, and I’m thrilled to have a real R8 in the picture! When I wrote the book, I never dreamed I’d actually end up sitting in the car of my literary fantasies. Many thanks to Doug S. and the staff at Glenmore Audi for letting me do the photo shoot at their dealership!

My only regret is that I didn’t ask to go for a ride in the R8, but I’m not too sad about missing out. It isn’t right to make a car like that slog along in Calgary traffic, and there’s no place around here where it could really strut its stuff. But even though I didn’t go for a cruise, the thought of riding in a hot car brought back a happy memory for me.

I’m not sure whether a love of high-performance automobiles is genetic or learned, but either way I was destined to inherit it. My dad’s dream car was a 1966 Corvette Stingray with the 427 big-block, and sometime in the mid-70s he bought one. (Aydan’s 1966 ‘Vette in the Never Say Spy series is based on my dad’s car. Are you surprised? Nah, I didn’t think so.)

We lived out in the country on gravel roads that weren’t Corvette-friendly, and Dad lived a busy life. The ‘Vette didn’t get driven very often, but every now and then he’d fire it up and go for a run. Since he had a wife and three kids and only one passenger seat, we kids didn’t get to ride along very often; but one day it was my turn. I was in my mid-teens at the time, not quite old enough to have my driver’s license, but old enough to know safe driving habits.

We rumbled out the lane and idled along the gravel road until we got to the highway, which was straight and flat with miles of visibility. Dad looked both ways, turned onto the highway… and punched the gas! He was always a careful and law-abiding driver, so I wasn’t sure whether to be terrified or exhilarated. The big engine roared and the tires chirped through the shifts. Dad dodged back and forth between lanes, showing off the handling (which was pretty good considering it was a brute-force muscle car), and then he pointed it straight and let the horses run.

As quickly as it had started, it was over. He slowed down and turned around, and we drove home as sedately as if we’d been in the family sedan.

But one or both of us might have been grinning.

So thanks again, Doug and the gang, for letting me “borrow” the R8, and for reminding me of a beloved memory of my dad and his dream car.

Dad’s Corvette 30 years ago. Yes, that’s an outhouse in the background.

Last week I was in automotive heaven… and it turned out to be more of a pain in the butt than I’d anticipated.

Rick and Sandy (of Hand Crafted Images) and I were doing the photographs for Book 2’s updated cover.  Car buffs may recall that Aydan drooled over an Audi R8 in THE SPY IS CAST, and wonder of wonders, I got up-close-and-personal with a real R8 this week thanks to the generosity of Doug S. and the staff at Glenmore Audi.

As with most undertakings that involve me, there was inappropriate laughter.

The dealership is a pristine building featuring bright white ceilings and sleek grey floors.  Other cars were scattered throughout the showroom, but two Quattros crouched protectively beside the R8, their feral headlight configurations watching us like predatory beasts.

Yes, I was slightly intimidated.

At first we trod reverently around the R8, not approaching it too closely so our heated and unsteady breathing wouldn’t fog its gleaming paint.

We were completely freaked out at the thought of being close enough to damage an automobile that costs more than twice what I paid for my first house.  We checked and re-checked the tripods that held the backdrop, cringing at visions of the metal poles toppling onto the car.

At last we had the backdrops in place and the moment of truth arrived:  It was time to unlock the car.

Then I would strip down to my ignominious outfit of stiletto heels and gym shorts (because I didn’t want to wear a skirt and accidentally emulate the Basic Instinct leg-crossing scene) and… yes… I would actually sit in the driver’s seat.

Also, this woman wearing stiletto heels looks slightly ridiculous anyway.  The R8 tops out at four feet.  In heels, I’m 6’-2”.  I towered over the car (and everybody else in the dealership).

The next issue was that the stilettos give me a 38” inseam.  Try stuffing those long legs into a car while holding your breath in case a lethal heel scratches something that costs more than your entire car.  But I managed.

In short order, the next issue surfaced.  The R8’s seats are set in quite far from the exterior body panels.  If I sat in the driver’s seat, my legs barely made it out of the car.  To get the shot we wanted, I’d have to perch on the rocker panel.

For the record, the R8’s rocker panels are not designed to comfortably accommodate a human ass.  (Nor a human posterior, for that matter.)

It got worse.  On the original cover, the model’s lips are parted.  It looks as though she’s pronouncing the letter ‘D’, and it’s supposed to look pouty or sensuous or something.

My pout looked more like ‘Duh’.  I stared vacantly into space, slack-lipped and clutching a cardboard cutout of a Glock.  I only managed a few minutes of that before dissolving into helpless laughter.  Thank you, Sandy and Rick, for your infinite patience!

But at last we packed up the equipment and vacated the premises with relief, leaving the fabulous car unscathed.  (Which was more than I could say for my aching ass.)

It was only afterward I realized that my butt was the only part of me that ever touched the car.  I never even put my hands on the steering wheel.

I guess I’m just not cut out for automotive heaven.

P.S.  Unedited proofs are always good for a chuckle.  Note my alter-ego in the reflection beside me: 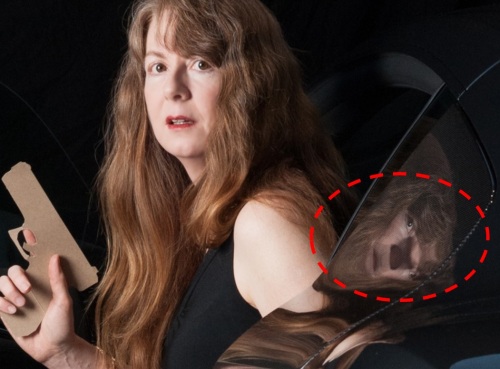 My inner werewolf sneaks out when I least expect it…