Psst!  Lean closer so I can share the latest sordid news from my personal life…

*glances around and lowers voice to a whisper*

Yesterday I had a sweaty four-hour session with five guys, and I’m so sore I can barely walk.  I guess I should just be grateful that the sixth guy with the really big tool didn’t participate much.

The whole experience wasn’t as much fun as the salacious stories say it should be; but maybe I was doing it wrong. 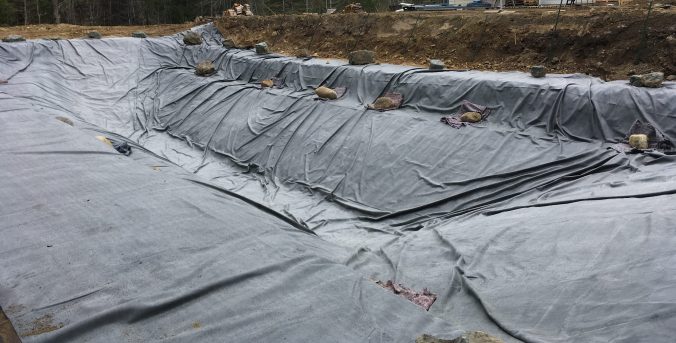 Yep, we finally got our pond done! The rubber liner weighs 1300 pounds, so Hubby and I planned the project very carefully.  Then we hired four guys from the local labour pool, and had an excavator operator (the guy with the BIG tool) standing by to place the rocks.

The excavator operator had dug the pond last week, and when I mentioned I’d hired guys from the labour pool to help install the liner, he raised an eyebrow. “Guys who can’t get a steady job in this economy? You’ll end up working harder than they do.”

But he didn’t realize that I have a secret weapon: I’m female, I’m strong, and I work really hard.  There aren’t too many young guys who’ll let a 55-year-old woman show them up.

(Have I mentioned lately that I love young guys?  My strategy doesn’t work nearly so well with older guys — sometimes they just shrug and say, “Nah, knock yourself out.  I’ve got nothing to prove.”)

Anyway, we got a great bunch of labourers — hard workers and nice guys.  We spent four solid hours raking, rolling, and wrestling (yes, I’m still talking about landscaping) to get the liner into place.

Even though Hubby and I had planned everything down to the last detail, we didn’t actually expect it to work the way we’d planned.  But it did — hooray!  Today we’re creaking and groaning a bit, but we’re triumphant.

And I gained a juicy story, so it’s all good. After all, how many middle-aged women can say they’ve gotten down and dirty with five guys at the same time? (And don’t forget the sixth guy with his really big tool.)  😉

Anything juicy happening in your world this week?

32 thoughts on “Getting Down And Dirty”