’Tis the season when I expend massive amounts of energy on my garden.

“Oh, is it planting time there already?” you ask.

Well… kinda, but not really.  I’ve planted a few seeds, but it’s too early for most things.

“Oh; then you’re digging and preparing your garden?  I could see where that would be a lot of work.”

“So exactly what is taking so much energy…?”

Well… um… my own idiocy.

Every day I hurry out to eagerly examine the garden.  Are any new crocuses blooming?  Are the cherry buds maybe just a bit fatter than yesterday?  Why are my poor rhododendrons looking so yellow?

I rush off to the Rhododendron Society and pick the brains of every member who doesn’t flee as soon as they realize I’m vectoring toward them.  I pore over obscure sites on the internet.  Organic fertilizer tailored to acid-loving plants:  applied.  Bark mulch:  check.  Could it be a magnesium deficiency?  I sprinkle on some Epsom salts.  Maybe the soil pH is too high.  Sulphur to the rescue!  It can’t be iron deficiency; our soil is red with iron oxide.  But maybe a little foliar feeding of ferrous sulphate would help…

Then I hover.  Maybe they look a bit better today.

I don’t know why I do it.  I’ve been gardening all my life, and I know better.  I have NEVER seen a plant respond to fertilizer overnight.  But that’s not from a lack of effort on my part.  With all the emotional energy I’ve been pouring into these plants, they should be surging toward the sky like Jack’s beanstalk.

I try equally hard to alter the climate through sheer psychic (or is that ‘psycho’?) effort.  I stare at the sky, fists clenched by my sides, willing spring to arrive.  Snow is not allowed!  The clouds must dissipate!  The sun must come out!

Our tomato and pepper seedlings have just emerged indoors, and I’m equally obsessed.  The light in the south window isn’t bright enough – they need to be outside.  But it’s only 5 degrees Celsius, and that’s not warm enough for tomatoes and peppers.  So they can go outside in the afternoon when it’s warm, as long as I remember to bring them in at sunset.  And when will they get their second set of leaves?  Tomorrow?  This evening?  NOW?!?

It’s lucky I never had children.  The poor kids would be scarred for life when they awakened in the middle of the night to find me leaning over their cribs with a measuring tape, checking to see whether they’d grown since I’d put them to bed a few hours ago.

Fortunately plants are oblivious to my antics; and in another month I’ll have so much garden work I’ll be far too tired to obsess over a rhododendron’s precise shade of green.

But until then… maybe I should check that rhodo one more time this afternoon. 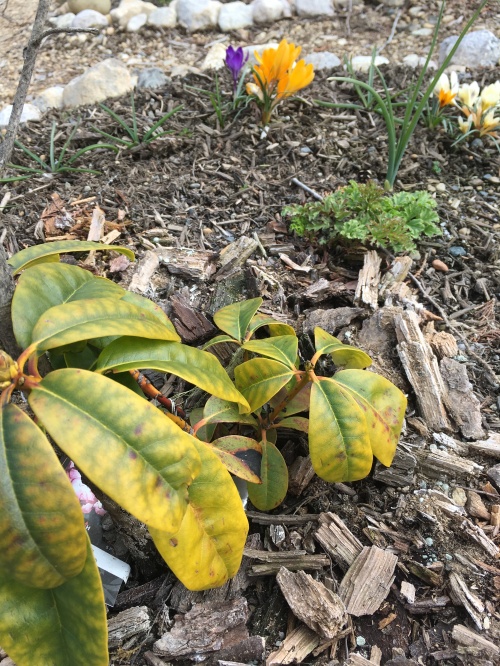