All my life, I’ve had issues with timing.

If there was a ‘worst possible’ time to attempt something, I would nail it.  In grade school, the other kids could whisper and pass notes all throughout class; but if I tried it even once, I got busted by the teacher instantly.

When I was running for a bus and my shoe flew off, it didn’t happen on the sidewalk.  No, the perfidious shoe launched itself off my foot while I was dashing across the middle of a busy six-lane street during rush hour.  Fortunately I didn’t get creamed by traffic or ticketed for jaywalking.  Or would that be jayrunning…?

And the one and only time my underwear elastic failed, it was while… you guessed it… I was running for a bus.  Fortunately I’d worn pants that day; so instead of dropping to my ankles and tripping me into the path of an oncoming truck, the errant undies only slithered down my hips and hung up on the crotch of my pants.  It wasn’t the most comfortable sensation in the world, but at least I didn’t get murdered by my own gitch.  (That’s yet another reason why I avoid wearing dresses.  Just think:  If I’d worn a dress that day they might still be picking my pieces out of a truck grille.  Dresses are hazardous to your health.)

Let’s talk about red lights.  You know those controller devices that emergency vehicles use to switch the traffic lights in their favour when they’re responding to a call?  Well, apparently I have one of those things implanted in my body… only it switches the traffic lights against me.

It’s actually a hereditary condition – my dad had the same problem.  If my stepmom was driving through the town near their place, she’d sail right through with green lights all the way; but if Dad was driving every light would turn red, every time.  I can’t drive through that town without hitting all the red lights, either.  Just when I think “This time I’m going to make it!” the light changes with impeccable timing.

This problem is so much a part of me that I rarely even think of it anymore.  I usually just accept it and move on… until this week, when it jumped up and bit me again.

I was sitting in my favourite chair enjoying the view from our upstairs window.  We live on a dead-end road out in the sticks, so vehicular traffic is sparse and pedestrians are practically nonexistent.

So I was looking out at the mountains absently rubbing my nose… when I lowered my gaze in time to spot a lone man hiking along, staring up at me at the precise moment I was apparently picking my nose.

But it could have been worse.  At least I wasn’t having a wardrobe malfunction as well…

Anybody else plagued with timing issues?

1Here’s a commercial that didn’t get aired during this year’s Superbowl, but I wish it had: 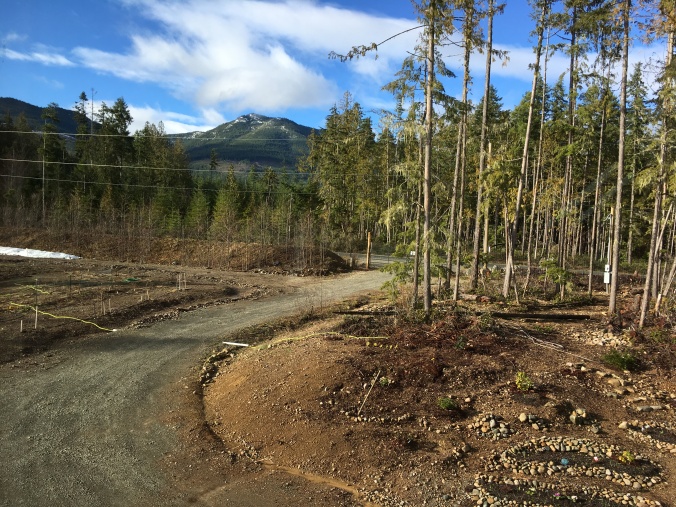 The view that bit me in the, um… nose.