When my nieces and nephews were young, I expended quite a bit of effort censoring my language while they were present.  When they finally became adults, I breathed a giant sigh of relief and promptly shocked the shit out of them when I reverted to my normal vocabulary.

I didn’t really mean to let it out all at once; it was just that I was so glad to finally be past the point where I could be accused of corrupting innocents.  I knew they’d heard it all before in school long before they ever heard those words pass my lips, but I didn’t want to be accused of being a bad example.

(Though, come to think of it, I’m still a bad example.  But at least as adults they can choose whether it’s more appropriate to follow my bad example or just pretend they don’t know me.)

Anyhow, my point is:  I thought my days as a corrupting influence were over.

I was wrong.  Last week I corrupted a dragon.

Not a mythical beast (which would have been oh-so-cool), but a software dragon.  Dragon Naturally Speaking, to be exact.  It’s supposed to transcribe spoken words into typed text and I’m always looking for ways to streamline my work, so several weeks before Christmas I bit the bullet and laid my money down.  Then I got so busy I didn’t have time to set it up.

But I finally had time to tackle it last week.  After a rocky start in which it pretended to recognize my microphone but in fact ignored it (causing me to exercise my considerable vocabulary once again), I got everything installed and ready to go.

Dragon learns your vocal quirks and vocabulary as it goes along.  One of the ways it does this is by reading through documents you’ve written and learning all the words that aren’t currently in its database.

You see where this is going, don’t you?

Yep, Dragon wanted to learn from me.  And hoo-boy, did it!  I was afraid its little software synapses were going to melt.

Its analysis of my latest book took quite a bit of time.  Then it spat out a list of ‘new words’ that looked like a tutorial for a preacher’s son off the leash for the first time: 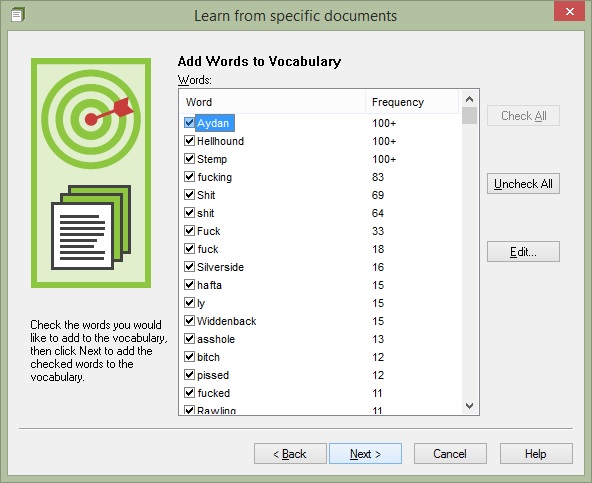 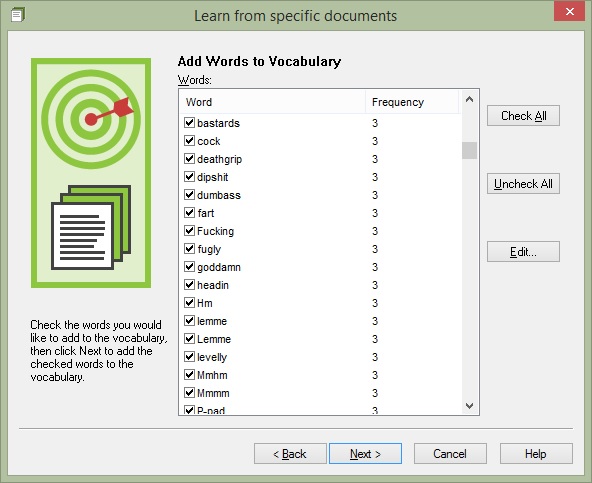 I didn’t know whether to laugh or be ashamed of myself.  (I laughed, of course.  Uproariously.)  And I foresee even more laughter in the future, when the software mistakes innocent words for their less polite counterparts.  Let’s just say that I won’t be using it anytime soon for writing business emails (unless I scrupulously edit it first).

To tell the truth, I’m little bit pleased that the next time Dragon messes up and makes me emit a burst of profanity, it’ll actually understand what I’m trying to say.

But I haven’t activated its ‘talk back’ feature yet.  Somehow that just seems like asking for trouble…

Anybody else ever used a speech-to-text program?  Any tips for getting the Dragon to sit up and pay attention?

How are we doing over at the VBBC?  Click here to have your say!

70 thoughts on “Corrupting The Dragon”