We watched Star Wars Episode VII a few days ago.  I’m not a rabid Star Wars fan, yet I still found myself re-enacting the epic lightsabre battle in my front yard for the amusement (or possibly bemusement) of the neighbours.

It started with a shrub.

Our house is one of those crappy layouts with vehicle access from the front, resulting in an unattractive “garage-with-house-attached” look.  Most of our front yard is occupied by the concrete driveway, but we’ve created a perennial bed beside it.  The bed contains a bunch of flowering plants, plus a single cotoneaster shrub that I keep trimmed to a manageable size.

The cotoneaster is not, however, in a convenient location.  The driveway is on one side and there’s a stepping-stone path on the other, but the shrub is smack in the middle, just out of comfortable reach.

I had two choices:  step into the perennial bed to get close enough to use the hedge trimmer with both hands the way it was meant to be operated… or balance precariously on one leg while leaning over to decapitate the cotoneaster with one-handed swipes of my deadly hedge-sabre.

Yeah, you know which one I chose.  (For the record, about the worst time to get the giggles is when you’re balanced on one leg, flailing around with a power tool that’s capable of shearing off twigs the diameter of your finger.  Fortunately I managed to escape a well-deserved painful injury.)

We also have a small decorative pond and waterfall in front of the house.  We take the pump out for the winter, but the piping remains year-round.  Somehow the water in the pipes manages to get stagnant and stinky even though it’s been frozen solid for six months, so we usually restart the pump on a breezy day.  Even so, the area around the front of our house always reeks for a few hours. 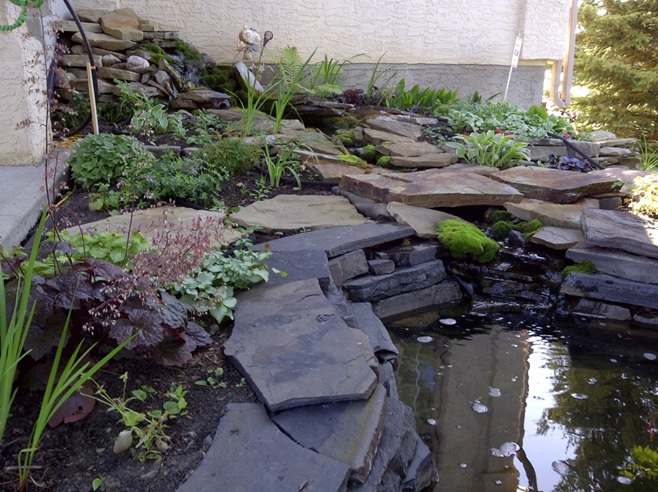 The pond last spring. It looks benign, but don’t inhale for a day or so…

So imagine me, surrounded by stink and locked in a duel to the death with the cotoneaster, then add this to your ridiculous mental image: a swarm of frenzied sky mice swooping and chirping around me.

What are sky mice, you ask?  Maybe you’ve heard pigeons described as ‘sky rats’; I call sparrows ‘sky mice’.  They’re just as annoying, useless, and prolific as pigeons, just not as big.  (I exclude song sparrows from this category – I’m talking about Chipping Sparrows, the little brown-capped guys that relentlessly repeat the same strident tuneless chirp from dawn to dusk.  It’s like a dentist’s drill to the eardrum.)

The Chipping Sparrows love our pond, our sheltering trees and shrubs, and the bird-friendly seed and berry plants in my garden.  I enjoy watching them through the window, but outside their incessant chirping drives me nuts.  I once christened a scare owl ‘Rodney’ because he got no respect from the sky mice, but they don’t respect me, either.

Maybe I oughta go after them with my hedge-sabre.  There’s a tiny chance that it might throw a scare into them, but more likely they’d just crack up with birdy giggles that sound just like their regular irritating chirp, only more derisive.  They’re laughing at me, I know it.

Then again, considering my performance a few days ago, I can hardly blame them…

P.S. The Virtual Backyard Book Club kicks off today!  Please click here or use the new Book Club button in the right-hand sidebar to join me on my virtual backyard patio for introductions! (I’m still ironing out the last of the wrinkles, so please bear with me…)

UPDATE:  Speaking of wrinkles… If you tried to access the Book Club site and got stymied with logins and passwords, that was my fault.  I messed up the settings, but they’re fixed now – please try again.  I’m very sorry for the inconvenience! 😦