Last year I mentioned that my home is a repository for creepy and disturbing items. But I also have a number of things that aren’t exactly creepy, but nevertheless indicate to the world that the inhabitants of this house are just not quite… normal.

For instance, there’s this: 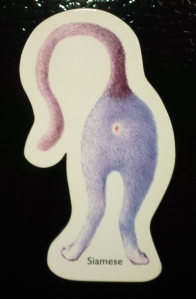 Yes, that is a cat’s-ass fridge magnet.

There is, of course, a story behind (pun intended) this.

Our family has always loved cats. I had cats for a couple of decades; my step-mom has a cat; and after being feline-free for quite a while, my sister got an adorable little orange tabby christened Phoebe several years ago.

Phoebe is lovely, but, like all cats, she’s fond of mooning. Especially as a kitten she loved to get her butt right up in my brother-in-law’s face, much to his vociferous disapproval. So when I discovered a package of fridge magnets shaped like cats’ asses, I had to buy them for him as a gag gift for Christmas that year. He duly gagged when he opened them, there was much hilarity, and then I got distracted by cooking and visiting and thought no more about it.

Until everybody left and I discovered the Siamese ass, the rudest one of the bunch, stuck to my fridge.

The cat’s-ass magnet subsequently became a family joke, and at one point my then-teenage niece got creative with my one of my other fridge magnets:

Is that modesty or lasciviousness?

Anyway, years passed and I had pretty much stopped noticing the cat’s ass, until my nephew and his wife visited with their kids last Christmas. Aged seven and four, the kids investigated the house and then joined us in the kitchen. I was yakking with the adults and didn’t notice what was going on until a little voice spoke up.

“Excuse me.” (These kids are polite.) “What’s that?” A little finger points up at the fateful magnet. Two wide-eyed stares fix on my face.

Nothing but silence and round eyes. They know damn well what it is, but there’s no way they’re going to say it to a strange adult (and I’m as strange as they come).

But after they left I stopped paying attention to the magnet again, except to glance at it occasionally and grin at the memories.

Phone rings. It’s my sister. Laughing her ass off.

And she sent me a picture:

Apparently a co-worker had found this package of fridge magnets and bought them for her, without even knowing the family folklore.

And so another round of tradition begins. Some families treasure special china or heirloom jewellery. We bond over cat asses.

Any oddball heirlooms or traditions in your family?