I love hearing from my fans, and a recent letter asked whether the facts in my books came from my personal experience, and/or how much research I generally do. That gave me a rueful giggle, because it revealed yet another variety of my kryptonite.

The auto-mechanic and home-renovation details come from hands-on experience, and Aydan’s wild motorcycle ride in Book 2 commemorates a few butt-puckering moments from riding an unfamiliar bike many years ago. The fight scenes are loosely based on real life, but they’re exaggerated all to hell (and I’ve been luckier than Aydan with my outcomes).

I love shooting, but I only kill paper targets. Art and food and music and computer-geekery are big parts of my life, too. Aydan’s athletic exploits have been adapted from my various adventures, particularly the falling-on-my-butt parts. (No comment on her other ‘adventures’ – that would give a whole new meaning to ‘hands-on experience’.) 😉

But the rest of it? The internet is my best friend and worst addiction – I research everything down to the tiniest detail.  Just for laughs, here are about half of my search phrases from the last 7 days:

For those of you who are speculating: Yes, it’s all related to Book 11, but don’t try to put it all together – I also use research to help me exclude ideas. (So don’t worry; none of the male characters are about to suffer a vicious blow to the nuts.)

And, because I know some of these search questions will stick like a brain-burr until you know the answers, here you go:

What oddball questions have you researched lately?

(Don’t worry, it’s safe to read this.  I promise it’s not about gross squished food.)

I’m a little scattered this week. Between my usual writing schedule, my cover updates (only one more to go, woohoo!), the production of the Never Say Spy audiobook (up to Chapter 39 and sounding great), and the busy round of Christmas cards and baking and extra social activities, my brain just doesn’t seem to want to disgorge any sort of organized blog post.

So what the hell, why fight it? Here’s a mashup up of some goodies that have caught my eye and tweaked my sense of humour lately:

You may recall that I mentioned OBSL in a post a few years ago. At the time, I created that acronym to describe my hypothetical Optimum Beer Saturation Level: That perfect point of intoxication at which I become a deadly 8-ball player. When I wrote that post I assumed that I was (as usual) full of shit.

Little did I know that greater minds than mine were busily proving me right. In fact, a recent study shows that there is an OBSL, and it occurs where your blood-alcohol level is 0.075. Unfortunately for my hypothesis, they weren’t testing for 8-ball skill; instead they were focusing on the OBSL as it relates to creativity.  And shortly after science delivered its verdict, some brilliant marketers capitalized on it. Voilà! The Problem Solver: A beer that comes with a creativity scale on the side. Dang, I could’ve used some of that stuff when I started writing this post…

And speaking of happy discoveries involving my favourite foods, science has come through yet again with a discovery that turns peanut butter into… wait for it… diamonds! Apparently it’s messy, but it works. (It was also just a publicity stunt.  It seems peanut butter isn’t an optimum diamond-producing substance.  Go figure.)

Unfortunately, though, the news from food scientists isn’t all good. The latest studies indicate that comfort foods can actually be depressing. Bummer.  Now I need to go and eat a bowl of ice cream.

Moving on from science to silliness (though still food-related), here are a few fortune cookie predictions I could have done without:

“You learn from your mistakes. You will learn a lot today.” – Great, just great.

“Your true love will show himself to you under the moonlight.” – Uh… okay, so my true love is a deranged flasher.  Will there be criminal charges or jail time associated with this?

“You have an unusual equipment for success; use it properly.” –  I guess if I was a guy, I’d know exactly what to do with my unusual equipment, but under the circumstances I’m just not sure how to interpret this.

“Wisdom is on her way to you.” – This one might be intended to encourage, but for me it bears an uncomfortable resemblance to the cartoon about the guy reading a fortune that says ‘Big things are coming your way’ just as a grand piano drops from the sky above him. Wisdom sounds like a good thing in theory, but it seems to me that the phrasing is a little ominous.

I’ll leave you with a cartoon that sums up my attitude when things get as hectic as they are now.  And hey, it’s food-related, too!

P.S. Here’s Book 8’s new cover, with many thanks to John R. for arranging my great truck-driving adventure and letting me photograph his truck: 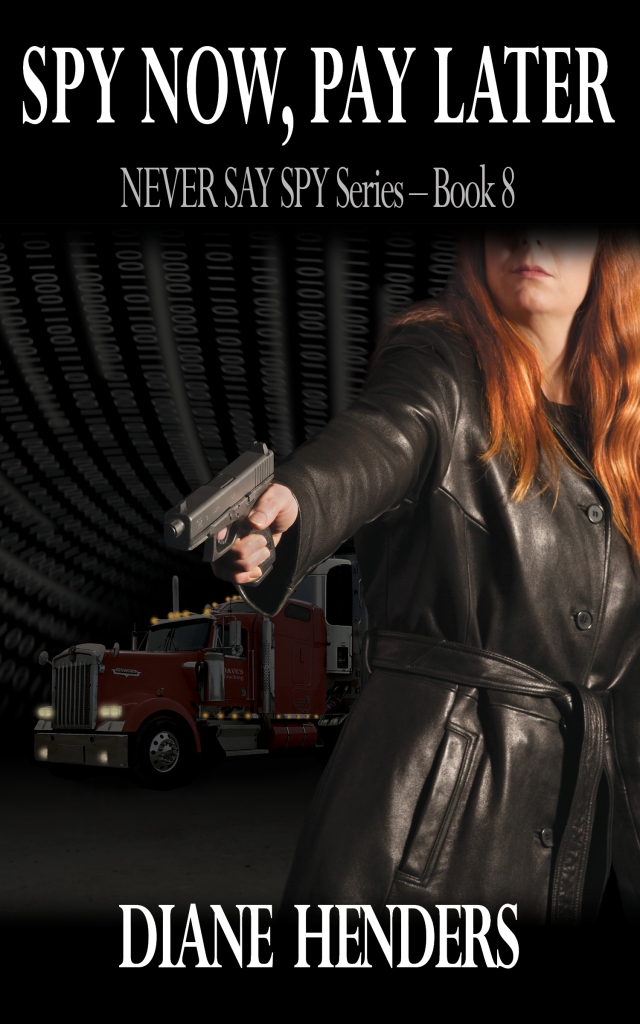 I’m always alert for research opportunities, and this week I was rewarded beyond my wildest dreams.

As you may know, I’m redoing my book covers. I’ve hired a professional photographer to do the main images but I’m filling in the backgrounds myself, so I needed a tractor/trailer unit for Book 8: SPY NOW, PAY LATER.  John R., one of the true Knights of the Road who’s been trucking for 48 years, generously agreed to let me photograph his truck.

Little did I know what was about to happen… 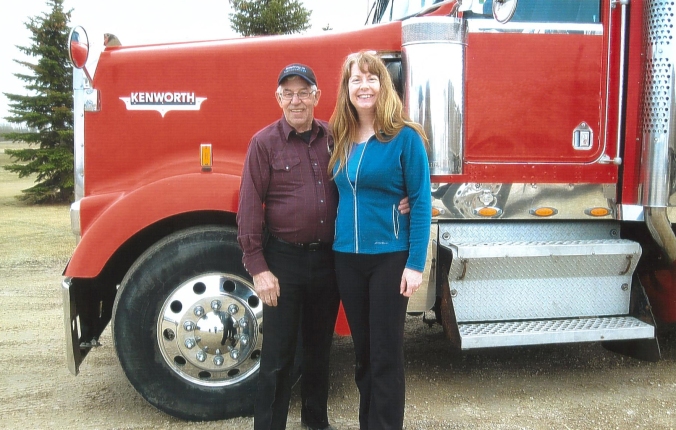 When we arrived at the depot, John offered to move the truck to where I could get a good shot. Then he asked if I wanted to get in the cab while he moved it.

Well, hell, yeah! I clambered eagerly into the passenger seat and peppered him with questions about the gauges and the engine and the air brakes and the jake-brake (engine retarder brake) and everything else, while he patiently explained it all.

I’ve always loved the roar and snort of the big diesels and the bone-rattling growl of the jake-brake, but I’ve never had a chance to get up-close-and-personal with them. Perched in the passenger seat grinning from ear to ear, I basked in the auditory delight while he drove across the yard.

I had finished my pictures and was turning away when John asked, “Do you want to go for a ride?”

Do I? Are you kidding? I was up into that passenger seat so fast I don’t think my feet even touched the steps.

When we reached the Trans-Canada Highway he turned left, which surprised me. I thought it would have been easier to turn right instead of crossing the median with the big rig, but whatever. I was in my glory, and John even indulged me by using the jake a couple of times even though it was completely unnecessary (we were out in the middle of nowhere so it wasn’t prohibited).

At the next small town he turned around to head back, but after crossing the median again to get us on the right side of the highway, he pulled over onto the shoulder and stopped.

Then he said, “Now you’re going to drive us back.” (John has trained lots of drivers for their Class 1 license so this wasn’t as reckless as it might sound, but I’m convinced he has nerves of steel nonetheless.)

After a moment of paralyzed disbelief, I jumped at the chance. My heart pounded so hard I thought I might have a heart attack and I’m pretty sure John’s steering wheel still bears the imprints of my white-knuckled grip, but I drove an 18-wheeler! How cool is that?!? 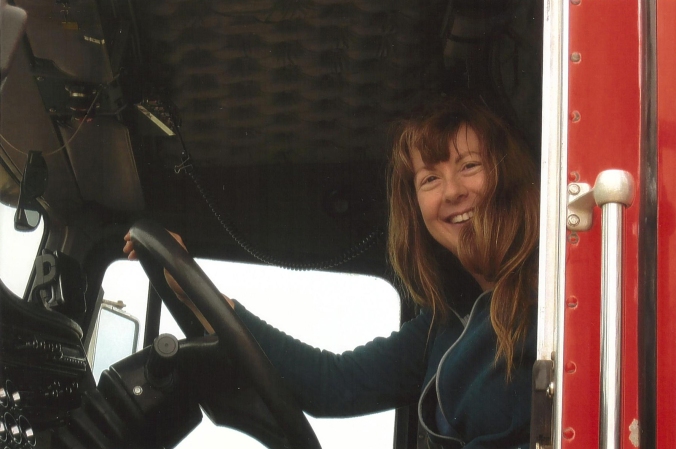 My short but thrilling trucking career (wild hair and all – we had the windows open so I could enjoy the sound of the engine).

I certainly didn’t perform any great feats of driving skill – John shifted the gears from the passenger’s seat because I couldn’t figure out the split-shift and keep my eyes on the road at the same time. But I kept it between the lines and I made the two turns off the highway and onto the yard without dropping the trailer into the ditch, so I’m going to call it a success overall. And it was a giant thrill!

Have I mentioned lately that I love being a fiction writer?

I really, really do!

Many thanks to John for my big adventure, and to his wife Nellie for documenting it with photos!