More Juggling (But Not With Fish)

September is shaping up to be a crazy month!  (Lucky I’m crazy enough to deal with it.)  I’m still picking piles of fruit and veggies from the garden, and we’re busily socking it away to enjoy throughout the winter.  The considerable overflow goes to our friends and neighbours as well as the Food Bank.

We might have been just a teeny bit over-enthusiastic when we were planting the garden, but… look at all this glorious food! 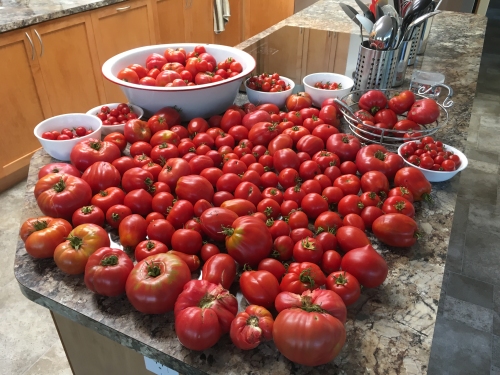 A single picking of tomatoes. (I pick a couple of times a week.)

Ten gallons of chopped carrots all ready for the freezer.

50 pints of pickles, 22 pints of jam, 7 pints of salsa, 28 pints of beans (another 20 pounds frozen), 24 pints of tomatoes and lots to go, and still a bit of space left for the rest of the beets and tomatoes and pickled hot peppers. YUM!

But our autumn isn’t only about food.  The flowers are still gorgeous, too, and the bees and other wildlife are hard at work stocking their own pantries:

This little black bear has been feasting on the wild cherries only a few hundred feet from our house. Don’t be fooled by his casual pose — he’s actually about 30 feet up a tree. (He’s a little blurry because Hubby took this shot using a LONG zoom — we have a healthy respect even for small bears!)

This little guy has been hard at work snipping off pine cones and stashing them away. 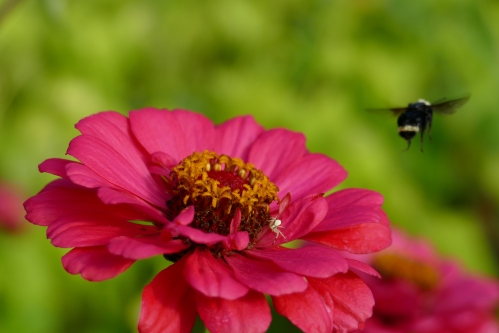 I’m not sure whether it was my camera or the tiny white spider (near the centre of the flower) that chased this bee off the zinnia. Either way, he’s buzzing off.

The snapdragons are still putting on a show.

One of our newest rhododendrons, Medusa, is a bit confused as to whether it’s spring or fall, but she’s beautiful anyway!

We’ll have a couple more rounds of houseguests this month, so maintaining my writing schedule for Book 15 will be a juggling act.  (Fortunately not with fish.)  To salvage some time I’ll dial back my blogging schedule to every second week for the month of September, so my next post will be September 18.

How’s your September shaping up?  Are you harvesting any goodies from your garden?

Book 15 update:  I’m bombing along on Chapter 4!  Hellhound would normally be voted “Most Likely To Get Arrested While On Vacation”, but Aydan’s the one who’s ended up in handcuffs…

As I’ve noted before, the universe seems to store up its oddities so it can dump them on me all at once.  Apparently this week its goal was to leave me just slightly disturbed.  (Some might argue that I’m already permanently disturbed, but pshaw.)

The first thing that left me feeling a little off-balance was the fact that I’ve been calling friends and family to see if ANYBODY wants some zucchini.  There’s only so much I can eat, freeze, and dehydrate, and I passed that limit after the first thirty zukes.  (And that was only two pickings.  I’ve been picking every second day since the beginning of July.  Math majors, don’t bother adding that up – it comes out to “far too many”!)

So I phone.  I always get voicemail.  (Is that a hint?)  I leave my message offering free zucchini.  And then…

They never call back.

This leaves me feeling just a bit… odd. Ordinarily I’d consider it rude if somebody completely ignored an offer of free food; but after all, we are talking about zucchini here. Zucchini is like that overly friendly coworker who keeps proposing weird-bordering-on-creepy social activities every weekend. Maybe it’s the thought that counts; but you’re not sure you want to encourage those thoughts.

(And that leaves me wondering whether I’m that coworker and I’m just too oblivious to realize it. These are the things that keep me awake at night.)

My next “Um… what?!?” moment came when I was doing some research for Book 15.  I began typing ‘Is it legal…’ into Google, and this is what popped up:

Seriously? Marrying yourself is the top Google search? How would that even work? And why?  (And don’t get me started about all the animal questions.)

My next ‘Uh-oh’ arrived while I was picking another big basket of cucumbers, as I do every… second… day.  (I may have to start breaking into people’s homes and leaving fresh produce behind.)

Anyway, there I was on my knees in the patch with all the bees working away at the blossoms… which were very near a certain place that’s quite dear to me. As I eyed the large bumblebee buzzing millimetres away from my crotch, I was reminded of the old joke about the guy in the dentist’s chair who reaches over to gently grip the dentist’s testicles and say, “We wouldn’t want to hurt each other, would we?”  I lack the testicles, but now I understand the trepidation.

And last but not least: I usually drink my morning cup of tea outside on our front porch. We still haven’t got our concrete poured, so my chair sits on a piece of plywood. And the other day when I glanced absently at it, I realized that it contained the face from Edvard Munch’s The Scream:

I’m here to tell you that it’s seriously disturbing to glance down and see that between your knees.  But I guess it’s better than an irate bumblebee.

So I’m slightly unbalanced as usual, but I’m still staggering forward.  How was your week?

Book 15 update:  I’ve almost finished Chapter 1!  And I’ve made another attempt at book cover redesign — what do you think? (See below.) 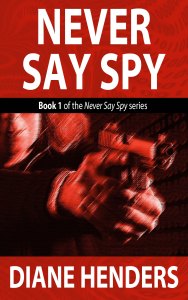 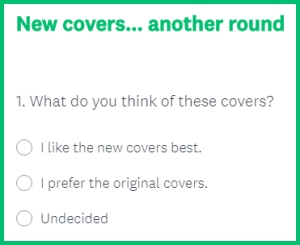 The other day I was working on Book 13 when I wrote “I made a beeline for the door”.  Then I stopped and stared into space as my brain took an unexpected detour.

Why does ‘make a beeline’ mean ‘to go quickly and directly to a destination’?  Have you seen how bees fly?  They look like little fuzzy drunks staggering home after a night on the town.

If I had actually ‘made a beeline’, I’d have wandered aimlessly around the room, made several erratic circles under a table and around a couple of chairs, gotten into a stranger’s face for no apparent reason, caromed off the window sixteen times before figuring out that I couldn’t exit through it, and at last arrived at the doorway; where I’d need three tries to make it through an opening several hundred times larger than myself.

Whoever invented all these sayings about bees had obviously never watched bees for long.  Take ‘busy as a bee’, for example.  Sometimes they’re busy, like these guys working away at my sunflowers:

But one summer morning I went out to water my garden, and eight of them were curled up together snoozing in a squash blossom.  They weren’t any too eager to get up and start working – after the first spray of cold water they struggled groggily out of the blossom, stumbling over each other like a bunch of hungover teenagers after an all-night party and buzzing complaints as they hauled themselves into the sky.  Then they staggered as far as the next flower before plopping down to sleep the day away.  So much for ‘busy’. 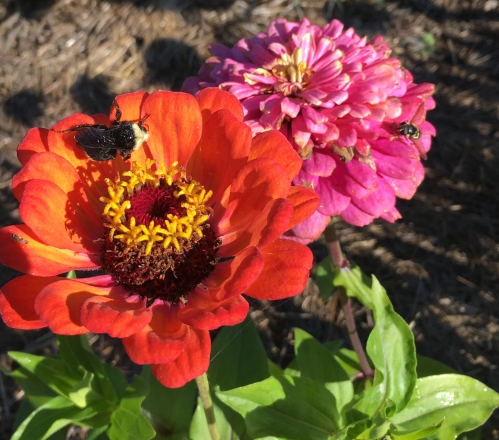 And let’s consider the time-honoured tradition of ‘talking to your children about the birds and the bees’.  Say what?

Neither birds nor bees have sex like humans.  Most birds only have one multi-purpose opening for sending or receiving semen as well as for taking a dump and laying eggs.  And most species aren’t too fussy about fidelity.

And bees?  Yikes!  Male bees follow a queen and take turns mating with her in flight.  When the deed is done the male bee’s penis gets ripped off, disemboweling and killing him in the process.  Unfazed, the next male in line pulls the leftover penis out of the queen’s body and re-enacts the whole grisly scenario.  Then the next male takes over, and the next.

‘The bee’s knees’ is another expression that makes me wonder.  Over the years it’s been used to indicate ‘something nonexistent’, ‘something very small’, and ‘something excellent’.  Apparently we aren’t too sure about the bee’s knees, either.

So if I should ever mention that I intend to make a beeline for bed to get as busy as a bee, it could mean staggering dozily away to sleep for hours; or zipping straight to bed for something a little more… *ahem* …interesting.  (Or downright disturbing.)

But what the heck; having a bit of mystery in one’s life is the bee’s knees, don’t you think?

Tagged as bees, busy as a bee, Diane Henders, euphemisms, humour, language, life, making a beeline, the bee's knees, the birds and the bees, writing