Moving to a new place always comes with a learning curve, so this week I thought I’d share some of the discoveries I’ve made since we arrived here on Vancouver Island.

For example, I’ve recently learned the correct Navy pronunciation for ‘submariner’.  I always thought it was ‘sub-ma-REEN-er’, but a true Navy man pronounces it ‘sub-MARE-in-er’.  (Coincidentally, I also learned some Navy slang for a gay man:  ‘diesel-driven turnip’.  Don’t look at me like that; I don’t have a clue how that expression came to be.  But it made me laugh.)

Speaking of the Navy, I haven’t met a ringer for Aydan’s Uncle Roger yet (in the Never Say Spy series, he was the favourite uncle who taught Aydan her best cusswords); but the other day a Hellhound lookalike roared past me on his Harley with his guitar strapped to his back; and I actually got to meet a real-life Dave Shore:

Paul was one of the truckers who delivered our shipping containers, and watching him finesse an 80’ tractor-trailer into our tiny driveway off our narrow road was education and entertainment combined.  I just stood there with my jaw dangling while he eased those big tires perilously close to the ditch, sometimes hovering a couple of trailer wheels over empty space.  Then he used a brilliant technique to squeeze into the driveway:  he locked up the trailer brakes while he continued to reverse the tractor, pivoting the 53’ trailer neatly around the 90-degree corner and into our yard.  Wow!

Talking to him was like gabbing with my fictional Dave:  He’s got 700,000 kilometres on his current rig, which is the third his current employer has issued him.  As he explained, “I keep miling them out.”  (Translation:  Driving so many miles that the truck has to be replaced, usually at 1,000,000 km.)  He’d rather sleep in his truck than in a hotel, and when asked about his retirement plans in a few years, he admitted, “I’m going to get an RV and drive around visiting my kids.  I just like to drive.”  It’s very cool to know there are real-life ‘Daves’ out there!

Marine life has been another novelty for me; some of it beautiful and fascinating… 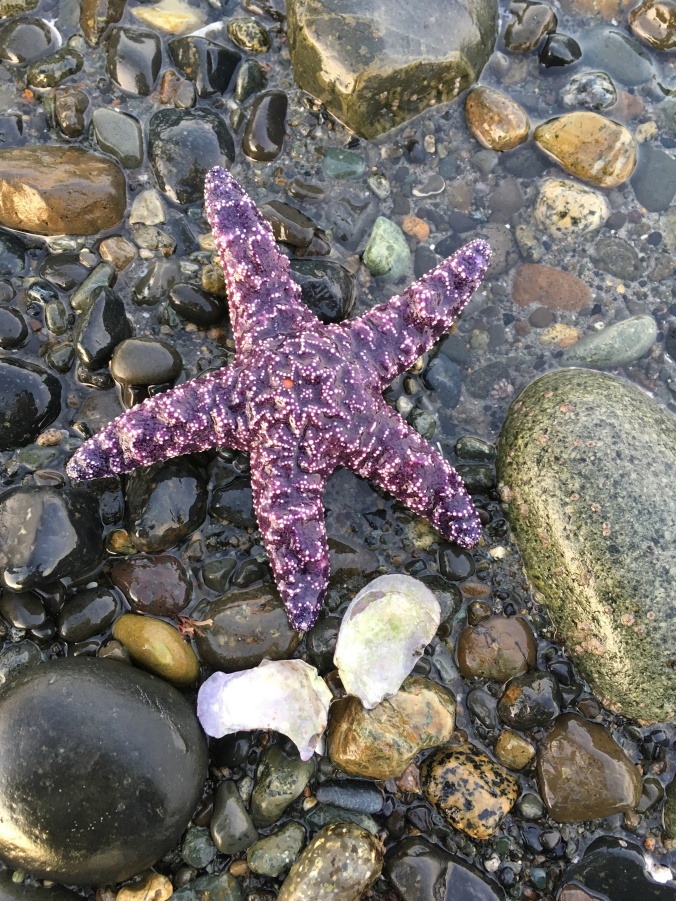 Starfish come in an amazing variety of shapes and colours from white to orange/red to blue/purple, and they have the ability to go from soft to rigid in mere seconds if you touch them. (Guys, did you get that?)

…and some of it quite horrifying:

I have no idea what creature wore this head before I found it bobbing gently in the surf. It was nearly ten inches across and it looked like some hideous sea monster, although it’s probably a mundane fish to a true West-Coaster. But I’m going with ‘sea monster’.

Rainbows after a storm:

And harbour seals playing.  (I was too far away so they only look like black blobs splashing around, but you get the idea):

…And we’ve only been here a month.  I can hardly wait to see the strange and wonderful things the Island has left to show us!

But here’s the best photo yet:  They broke ground for our house on Monday!  Hooray!  (Speaking of finesse and expertise, Sam the excavator operator is an artist.  His touch with that bucket is so delicate and precise you forget that he’s moving literally tons of earth at mind-boggling speed.  Apparently he began operating a small excavator when he was 8 years old.)

It might not be as scenic as the rest of the photos, but this one makes me very happy!

What’s new in your world this week?  And… does anybody know what that sea-monster-critter actually is?  (Or, more accurately, ‘was’?)

50 thoughts on “Submariners And Sea Monsters, Oh My!”