I’d like to think it’s not just me. Doesn’t everybody harbour a few items in their home which, when considered out of context (which is to say, ‘by any sane human being’), are just a little… um… creepy?

Some things are intentionally creepy, and that’s okay. For instance, I love this candle-holding sculpture my sister gave me years ago: As the candle flickers, its eyes glow and seem to follow you around the room. 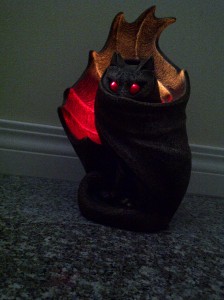 Totally creepy, but in a good way.

In the ‘that’s odd’ category of creepy, I also own a stuffed beaver.  *insert the revolting double entendre of your choice here*

No, really, it’s a child’s toy. I’m not sure I’d want to meet the twisted toymaker who one day looked up from his designs of cute, cuddly bunnies and bears and thought, “We need beavers!”

…Okay, I realize most guys have that revelation at some point in their life, but this guy followed it to its logical conclusion: “Everybody needs beavers!” And here’s the result: 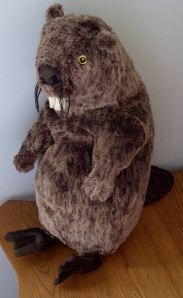 He’s cuddly-soft, and his name is Bob. Don’t ask.

Moving on up the ‘disturbing’ scale, I also own two rubber chickens that reside in the planter in my living room. Well, to be technically accurate, one’s rubber and the other is silicone, which is even grosser than rubber because it’s all wobbly and floppy.

But the rubber one makes up for its deficiency in the gross-out department, because: 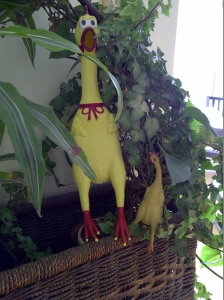 I’m not sure which bothers me more, the gaping beak of the big one or the flaccid-phallus appearance of the little one…

But the top ‘Creepy and Disturbing’ award goes to our dining room furniture. You’d think it would be pretty difficult to make shudder-worthy dining chairs. And I’m not talking about physical discomfort.

No, I’m talking about the kind of creep factor that sends a shiver down your spine and makes you question whether you really want to turn your back on the item in question. I mean, seriously, what sick and deranged mind thought it would be a good idea to carve this on the back of a dining-room chair? 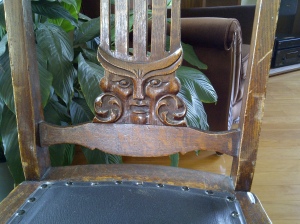 Would you turn your back on this?

It looks like one of the minor demons from hell, perched at exactly the right height to chew a crippling chunk out of your spinal cord with its fiendishly gaping mouth. Then once you’re incapacitated, who knows what it might do?

This dining-room set belonged to my husband’s grandparents, and as far as I know they lived healthy, normal lives unmolested by denizens of the Pit… but these chairs give me the shivers anyway. I’ve lived with them for over a decade by convincing myself that, like gargoyles, they’re fierce guardians of our home. If anybody ever threatens us, look out! The chair demons will get them!

Anybody else harbouring satanic furniture or other creepy items?

Woohoo!  I’ve finished the draft for Book 8, and it’ll be off to my beta readers / editors this week!

As I’ve mentioned here and here, there’s convincing evidence that I’m a sociopath.  But a few days ago, an unsettling thought bobbed to the scummy surface of the cesspit that is my mind:  Maybe I’m also a creepy stalker.

I mean, really, what’s the difference between a close friend and a stalker?

Close friends know your likes and dislikes, have a pretty good idea of your schedules and habits, call you frequently, and show up regularly to spend time with you.

So do creepy stalkers.

The more I think about it, the more I wonder.  Social skills aren’t really my best thing.  I fake them well enough for short periods, but then I scuttle back to my hidey-hole and hunker down behind my computer to converse with (at best) people I know only through a few typed words on my screen and (at worst) imaginary characters in my books.

I do this for days and weeks on end.  I go out to the pub once a week for a beer and some conversation with real human beings, but that’s about it.  If I wasn’t married, I’d probably go for days without human interaction, so it’s not like I’m really socially aware.

How many times can I call somebody before I’m officially being creepy?  If they don’t call back, does it mean they’re just busy or forgetful?  Or does it mean they’re screening their calls and thinking, “Oh, God, it’s Diane again.  She’s so creepy.  I’m going to pretend I’m dead.”

Problem is, most people are too polite to tell me to buzz off.  I tend to take people at face value and I’m disinclined to obsess over the emotional temperature of everyone I meet, so I don’t really know whether they’re genuinely glad to see me or if they give a whole-body shudder and take six showers after I leave.

I think it’s probably a good sign if they return my calls, unless they’re calling to decline my last ten invitations and tell me they’re going to be busy until the year 2045.  But that only happened with the last three people I called, so it’s not really statistically significant, right?

Maybe the restraining order is a clue, though.  More analysis is required.

Last week I was at an all-you-can-eat restaurant where each table had a little cylinder that was green on one end and red on the other.  As long as you wanted more, you left the green end up, and they kept bringing food.  Red-end-up stopped the whole thing.

That’s what I need:  a signalling system.  Green means “it’s all good”, yellow means “you’re starting to creep me out”, and red means “stay away from me, you nutball freak”.

That system probably wouldn’t catch on, though.  It seems most people actually prefer a little ambiguity in their relationships.

I guess the upside of all this is that sociopaths generally disregard the feelings of others.  Maybe this isn’t such a burning question for me after all.

So… wanna go for a beer tonight?

Friday’s good for me, too…