(Don’t worry, it’s safe to read this.  I promise it’s not about gross squished food.)

I’m a little scattered this week. Between my usual writing schedule, my cover updates (only one more to go, woohoo!), the production of the Never Say Spy audiobook (up to Chapter 39 and sounding great), and the busy round of Christmas cards and baking and extra social activities, my brain just doesn’t seem to want to disgorge any sort of organized blog post.

So what the hell, why fight it? Here’s a mashup up of some goodies that have caught my eye and tweaked my sense of humour lately:

You may recall that I mentioned OBSL in a post a few years ago. At the time, I created that acronym to describe my hypothetical Optimum Beer Saturation Level: That perfect point of intoxication at which I become a deadly 8-ball player. When I wrote that post I assumed that I was (as usual) full of shit.

Little did I know that greater minds than mine were busily proving me right. In fact, a recent study shows that there is an OBSL, and it occurs where your blood-alcohol level is 0.075. Unfortunately for my hypothesis, they weren’t testing for 8-ball skill; instead they were focusing on the OBSL as it relates to creativity.  And shortly after science delivered its verdict, some brilliant marketers capitalized on it. Voilà! The Problem Solver: A beer that comes with a creativity scale on the side. Dang, I could’ve used some of that stuff when I started writing this post…

And speaking of happy discoveries involving my favourite foods, science has come through yet again with a discovery that turns peanut butter into… wait for it… diamonds! Apparently it’s messy, but it works. (It was also just a publicity stunt.  It seems peanut butter isn’t an optimum diamond-producing substance.  Go figure.)

Unfortunately, though, the news from food scientists isn’t all good. The latest studies indicate that comfort foods can actually be depressing. Bummer.  Now I need to go and eat a bowl of ice cream.

Moving on from science to silliness (though still food-related), here are a few fortune cookie predictions I could have done without:

“You learn from your mistakes. You will learn a lot today.” – Great, just great.

“Your true love will show himself to you under the moonlight.” – Uh… okay, so my true love is a deranged flasher.  Will there be criminal charges or jail time associated with this?

“You have an unusual equipment for success; use it properly.” –  I guess if I was a guy, I’d know exactly what to do with my unusual equipment, but under the circumstances I’m just not sure how to interpret this.

“Wisdom is on her way to you.” – This one might be intended to encourage, but for me it bears an uncomfortable resemblance to the cartoon about the guy reading a fortune that says ‘Big things are coming your way’ just as a grand piano drops from the sky above him. Wisdom sounds like a good thing in theory, but it seems to me that the phrasing is a little ominous.

I’ll leave you with a cartoon that sums up my attitude when things get as hectic as they are now.  And hey, it’s food-related, too! 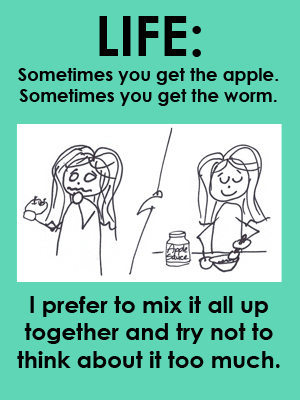 P.S. Here’s Book 8’s new cover, with many thanks to John R. for arranging my great truck-driving adventure and letting me photograph his truck: