Something Wicked This Way Comes

They’re coming for us.

I’m not talking about the usual Halloween ghosties and ghoulies. These aren’t human beings in masks and makeup. This is the real thing; a nightmare come alive. 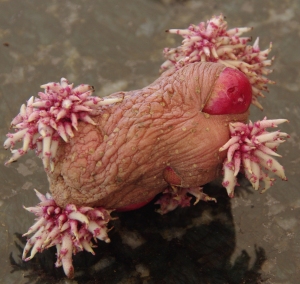 How would you like to find this when you stick your hand in the potato bin?

These are last year’s potatoes – we didn’t finish them up before we dug the new ones, and now apparently they’ve decided to reproduce all on their own. They’re actually growing new little potatoes inside the old ones.

I’m totally creeped out. It’s like one of those pod-people horror movies, only it’s happening in our potato bin. And just in time for Halloween, too.

Maybe we should put these out on our front porch instead of a jack-o-lantern. I bet that would cut down on the trick-or-treaters (or, as we often call them, Halloweeners, but that word always makes me think of a semi-artificial meat product all gussied up in a little costume).

I like Halloween.  Its origins are shrouded in mystery and nobody remembers or cares whether it was originally a religious or secular occasion. It celebrates absolutely nothing, and does it with silly costumes and free candy.  What’s not to like?

We need more days like Halloween, but I think we adults should get goodies along with the kids. Maybe candy for the kids and booze for the parents, so the adults will be sufficiently mellow when their little darlings consume the entire contents of their candy bags and become hyperactive human cannonballs with projectile vomiting. I don’t have kids of my own, but an overstimulated child with a belly full of candy sounds like the world’s scariest horror movie to me.

Hubby and I used to stay home and hand out treats, but for the last few years we’ve been Halloween grinches. We vacate the house around five o’clock and go to the bar to shoot pool, nicely avoiding both the parade of kids and our subsequent pig-out on leftover chocolate bars. (‘Cause you wouldn’t want to run out of candy, right? So you have to buy lots. And it only makes sense to buy the kinds you like.)

But maybe this year we should stay home and hand out potatoes. They’re the perfect Halloween treat: delicious, nutritious, and scary as hell.

Anybody else harbouring mutant vegetables? What are your Halloween traditions?

31 responses to “Something Wicked This Way Comes”