For those who weren’t privy to my whining on Facebook this weekend, we just had a foot of snow: 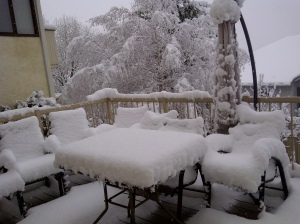 Eight inches after the first twelve hours. Drinks on the deck are postponed until further notice.

It’s depressing to get snow in May, but it’s not unheard-of here in Calgary.  And I’d rather have it now than in the middle of August… which has also happened: 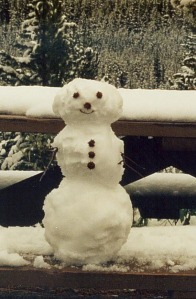 Aside from griping of epic proportions, Calgarians have more or less ignored the snow and gotten on with life.  After all, we know it’ll probably snow again in a couple of weeks – it’s practically a tradition to get snow on the May long weekend.  But it’s okay, because snowbanks are a great place to keep your beer nice and frosty while you’re camping.

(Yes, we’re Canadian.  We push our lawn chairs into the snowbanks and sit around the campfire drinking cold beer on the long weekend regardless of the weather.)

The funny part is that the snow was preceded by rain, and it was the rain that totally messed people up.  You’d think it had never rained before.  Drivers bumbled through red lights, turned from the wrong lane, inexplicably slowed to a crawl in the middle of the road, and generally made me wish for a crate of Zombie Bullets and a Gatling gun.  I don’t know what it is about rain that makes Calgary drivers so painfully stupid, but my best guess is that IQ points are water-soluble.  Lucky it doesn’t rain very often here.

Someone once said, “Marriage is all about give and take:  Give blame; take credit”, so I blamed Hubby for the snow.

In the first place, he fired up the motorcycle a few weeks ago, which is a sure-fire way to make it snow.  Then he started talking about outdoor archery tournaments, and our fate was sealed.

I did my best to trick the weather into thinking it was okay to warm up:  I left my snow tires on the car and the snow shovels by the back door.  But it wasn’t enough.  Hubby’s bad juju trumped my feeble efforts.

Interestingly, the only time Hubby ever has bad luck with weather is here at home.  When we’re travelling, he’s a good-luck charm.  We often visit Vancouver Island in the middle of winter, and its coastal winter climate dictates rain, rain, and more rain.  But any time we’ve gone, the weather turns nice as soon as we get there.

We even went to Tofino in the middle of December:  prime storm-watching time.  But not for us.  It was raining a bit when we got there in the late afternoon.  The next morning the sun came out, wispy clouds floated across a blue, blue sky, and the rufous hummingbirds came out to dance a ballet on the sunbeams.  It was Disney as far as the eye could see. 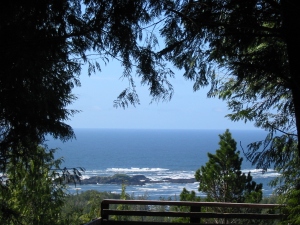 And speaking of Disney, yesterday I discovered the true culprit behind our dump of snow.  Apparently the morning of the big snowfall, one of my employees’ little granddaughters stared out at the white-coated world before turning wide eyes up to her mother.

“Mommy!” she exclaimed, “My frost magic must have leaked out while I was sleeping!”

So now I know who’s to blame, but she’s so darn cute I’d feel like an ogre if I did.  And that’s snow fun.

P.S. If you want to connect on Facebook, the link is over in the right-hand column of the page.  I promise I don’t usually whine… but you’ll be subjected to whatever silliness falls out of my head.  Don’t say I didn’t warn you.